SEG members read this review on June 2020’s edition of Live Rail.  Pressure of life has delayed this web version until now, but here it finally is!

Bachmann’s new version of a Class 159 diesel unit (Network SouthEast livery 31-520) became available in May 2020.  The new version 158/159s were announced in May 2012 so we have been waiting a long time for them.  Has the wait been worth it?  To get the elephant in the room out at the very beginning – the price.  This new 159 is 345% more expensive than the NSE 159 sold for in 1998.  Over this period inflation in the UK (according to the Bank of England’s inflation calculator) has been 77%.  Whilst this model is undeniably an improvement justifying some increase in price, and for well documented reasons model railway inflation is running above general inflation, is this model worth such a large increase in price?  This is something for each prospective purchaser to decide and only time will tell if sales of this model are a success.  However, the price militates against buying multiple numbers of these models and is not running more than one unit what multiple unit modelling is all about?  Ironically one useful new feature of this model is a working scale coupler on each end allowing multiple operation without modification.

Bachmann’s Class 158 models of 1996 and the subsequent Class 159 model were state of their art for their time, were (and still are) popular and highly regarded.  Their strong features are a well detailed flush-glazed body and a powerful 8 wheel drive from a centrally mounted flywheel motor on a heavy alloy chassis.  The detracting issues are that the drive took up the entire interior of one car and the windows are tinted to obscure, there is no working coupling on each end, the underfloor detail is finely moulded but cast as a block, the directional lighting is basic and it is not easy to install a DCC decoder.

Given the price and having compared the pre-production sample on display at exhibitions with older versions running on layouts at the same exhibitions I decided that only buying models in liveries I did not already have is justified.  As a result my first purchase was a Class 158 in GWR green.  This usefully displays a destination of Bristol Temple Meads so could be a short working from Portsmouth Harbour.  In recent times GWR have used 3 car 158s on the South Wales – South Coast route but the price of this model counts against buying second model to split and provide the third driving car.

On inspecting and running my GWR 158 I was most impressed by the very well detailed underfloor mouldings – which are separate items – the visible interiors, the flexible lighting options for both DC and DCC, the ease of fitting a DCC decoder (Plux22 type which fits behind a removable part of underfloor equipment), an installed loudspeaker if you are into DCC sound and the sprung working scale couplers on each end.  This new version has a small five pole motor and flywheel driving both axles of the inner bogie via a cardan shaft in each car.  In addition each car weighs substantially less than the previous version.  The result is an absence of the pleasing smoothness and inertia exhibited by the previous version.  Of course DCC users can programme their chip to replicate inertia but this does not help DC users.  I only test ran my model for about twenty minutes but I found it to be noisy, growling not unlike the real thing.  If it were not for the absence of ticking over sounds I cannot see the reason for DCC sound!  Also it did not sit on the rails nor run well straight out of the box.  I found this due to one of the axles in each unpowered bogie not being seated correctly in its axle boxes.  From comments I have read this appears to be a common manufacturing or transit problem, though it is easily and quickly fixed.  The cars are joined electrically and mechanically with a 14 pin latching coupler.  Whilst better than other types of electrically conducting couplers I did not find it particularly easy to couple the cars together and great care is required to avoid bending any of the pins.  I would not want to couple and uncouple the cars too many times.  Coupling is best done with the cars on their sides (body paintwork suitable protected) and then rolled onto the track as a compete unit.  Whilst the body side, end and roof moulding is a bit finer I put in in my “not so much as you’ll notice” category.  However, I subsequently went against my purchase policy and also bought the Network SouthEast 159.  I noticed more finer detail on this lighter livery.  Being a Southern fan I like my trains green, but not the GWR green.  This horrible dark green appears to obscure some of this model’s bodyworks’ finer points.  Having bought the 159 I can inform you that the centre MSO car is unpowered but I have not yet done sufficient running to establish if this renders the unit under-powered.  The destination of the class 159 version is London Waterloo.  If South West Trains and South Western Railway versions are to follow (my preference is the latter because I already have the earlier SWT version) we had better start saving.  However, given Bachmann’s lead times we might have a long time in which to save. 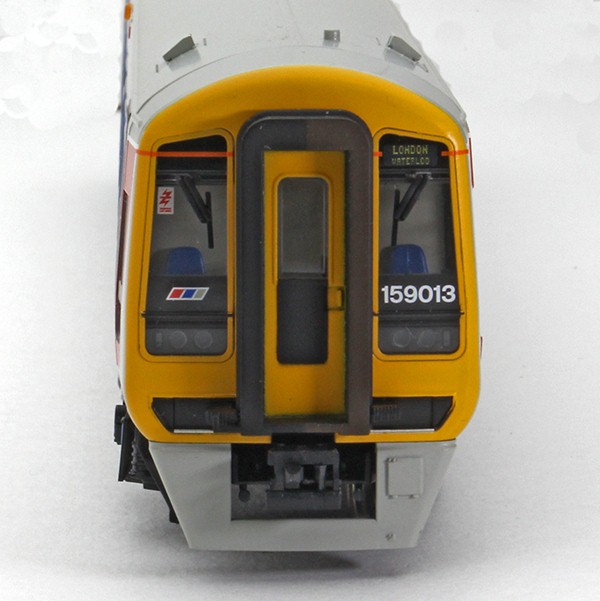