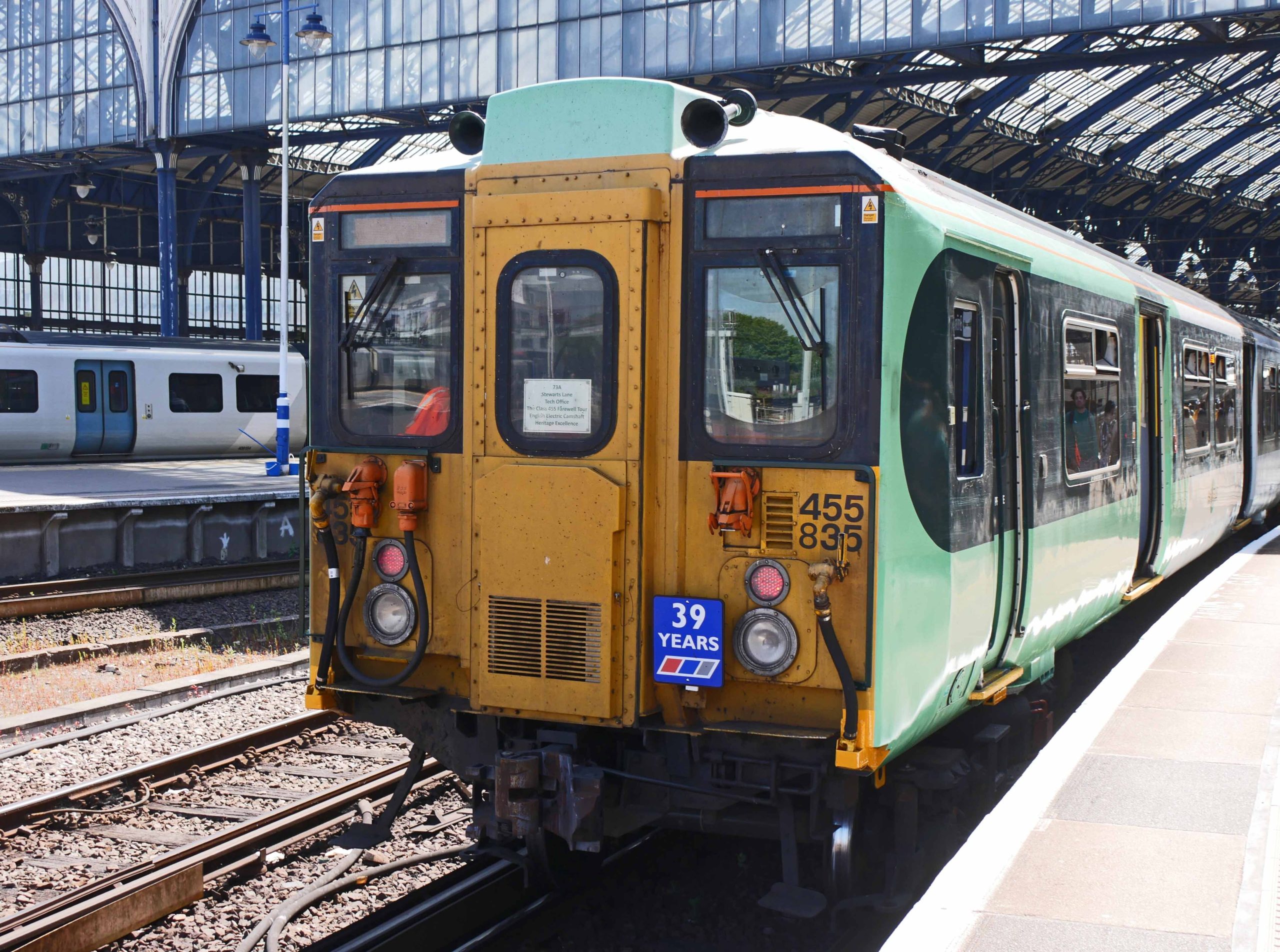 Stuart Hicks gives a full account of the tour:

An enjoyable day on Saturday was had by all by a sold out tour train formed of class 455s 5835 and 5841.  The day was warm (but not too hot) and blessed with sunny intervals all day.

Departure from Victoria platform 14 was punctual (despite passengers only being allowed to board a few minutes before) and as you can see on RTT the tour ran close to time all day apart from the leg from Blackfriars.    Leaving London via the fast lines we took the little used fast line spur at Streatham onto the Mitcham Junction lines and headed south through Sutton and Dorking towards Horsham (loop platform 4) and finally Billingshurst.    The class had been cleared to Billingshurst in case reversing was unavailable for any reason at Horsham and we duly reversed quickly over the crossover south of the station and returned north.

Next destination was Three Bridges where there was a quick PNB stop in Platform 2 before we reversed southwards, calling briefly at Haywards Heath down loop to be overtaken (and grab more images) and then heading via the Cliftonville spur round to Hove to reverse and head into Bridgton’s platform 2 for an extended break.

Plenty of time to purchase platform tickets, photograph the tour, Class 313/2s and anything else of interest, purchase lunch, use the station toilet facilities and seek the current B&H bus timetable booklet (which they seem to have discontinued).

Then another slow triangular move – back to Hove P2, up to Preston park P1 (booking office closed) and into Brighton P6 for another pick up and to allow us to head east towards Lewes for another crossover reversal, at signal LW58.  That done we headed towards Haywards Heath again and then via the Quarry line at some speed to east Croydon P2.    Then a crawl past Norwood Junction (where we exchanged horns with another class 455 rake) via the slow lines behind LO services before we crossed to SE tracks entered London Bridge slightly early.     Overtaken at Metropolitan Junction we crawled on up the slow line towards Waterloo East but then crossed to reach familiar station of Charing Cross P6.   PNB and images sorted we left again for Blackfriars – route via South Bermondsey, more familiar haunts of North Dulwich (from my university days), Leigham Spur (rare for passenger trains these days). Past several class 455 sets in Streatham hill sidings before crossing to the fast line east of Clapham Junction and diverging at Pouparts round to South Eastern section tracks.  The Canterbury Road to Loughborough Junction curve does not see passenger trains and we briefly saw more rapid progress but the fainting of a passenger on the platform (4) at Blackfriars meant that we lost our path and had to leave at 1712 (vice 1642).   More time for the PNB stop though.

The raffle was announced on leaving Blackfriars.   Over 30 prizes had been donated by different parts of the railway industry (see list 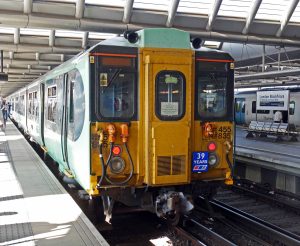 attached) raised nearly £3000 for the Southern charity, Mind, which is based in Croydon.    Meanwhile a sale of builder’s plates (£45 each), roller blinds, headboards and body side flame cuts from 5825 raised £3,800.  Nearby customers won 5801’s cab brake gauge (the Live Rail editor) and a replica NSE Victoria station sign.   Total donation to the charity (including fares as well) was expected to be close to £25k.

The SEG/NSERS sales stand also did well and sold out of almost all its stock and has made a donation to Mind..

Chris Green was on the train and appeared in photographs at Brighton.

The return to Victoria via Orpington took the fast line spur at Chislehurst and then crawled up the Catford loop and then sunk down into Stewarts Lane to reach the Central side and enter platform 9, lucky not using the excessive pathing time on this section.   A quick walk to Ebury Bridge saw the stock leave, and another 455 operated service arrive, and I gather that the tour sets will be off to Sims on Tuesday, passing Reading around 1300.

A great day and a good sum raised for charity.  It was also good to see many familiar faces but also note the diverse traveller base with a lot of younger enthusiasts.   Thanks to Southern and Network Rail for planning and facilitating this trip, to South Eastern for their conductors, to the BLS for the stewarding and to NSERS and SEG for the sales stand.