First announced in January 2009, the first version, in BR Blue, was delivered to the Modelling Secretary on the 20th May 2011. We published a “first impressions” review on that day, but now that we have had the model in our hands for almost a month it is right we give a more considered view. 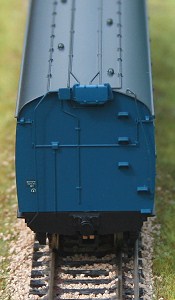 Not that we would ever recommend that anyone goes through life looking for faults and problems, but those that know their EPBs well have not found anything wrong about this model in terms of dimensional and detail accuracy. In fact, the consensus is that this is a stunning and superb model. There is a significant issue on this first version that the car numbers have been transposed – see later – but Bachmann have a plan to deal with this. Otherwise this model is liberally dripping with fine detail. Of particular note are the cab ends, roofs, underframes and car inner ends. The paintwork and graphics are extremely well done indeed. The pictures below begin to tell the story, but having this model in front of you really brings home the incredibly high standard that mass produced ready to run models has achieved. 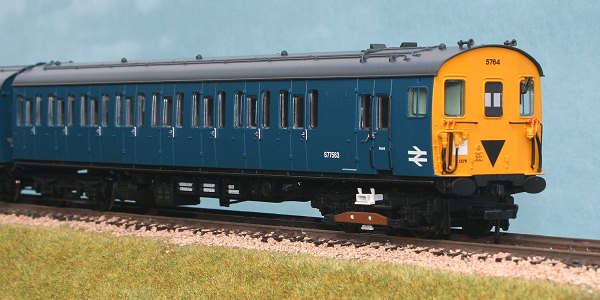 Each car comes packed in what is now the “normal” Bachmann box enclosed in an outer box so that both cars are visible through the windows. 31-375 represents unit 5764 in BR blue. This was a Slade Green allocated unit, so can happily be run alongside Bachmann‘s late green and blue & grey 4Cep units. Once their MLV is available, excepting a 2Hap/Sap/4Cap, that will sew up Kent electrification from the late 1950s to 1990s (4DD excepted)!

The DMBSO contains the motor bogie. As with their 4Cep models there is a sturdy can motor in the body driving the bogie under the cab. This permits driving cab detail. The majority of the motor is hidden in the brake van but it also protrudes as far as the second passenger door, i.e. takes up the first three rows of seats. The DMBSO interior is correctly divided into two open saloons. The luggage racks are not represented. The DTS correctly has an open saloon behind the cab and five compartments, again luggage racks are not represented. No smoking accommodation is as per Appendix to Carriage Working Notice diagrams of the period. The headcode panel on the DMSO has a double white blank, on the DTS there is a double red. Alternative headcodes are not supplied and the installed headcodes cannot be readily changed. The cab front of the DMSO displays an inverted black triangle – note contrary to popular belief this does **not** signify “brake van this end” but correctly means “no brake van other end” (i.e. units with brake vans at each end did not display the inverted triangle).

As with their 4Cep model this unit only requires one DCC decoder and the same sort of conducting drawbar is supplied (with one spare). Putting together only two cars is much easier than four! A 21 pin DCC socket is installed and the DMBSO body needs removing to install a decoder. The instructions are commendably comprehensive about how to remove the bodies, but you do not need to read between the lines to realise care needs taking to avoid damaging fine detail, particularly the footboards along the side. The headcode boxes and car interiors are illuminated. Using DCC these can be switched separately. As befits the drive, this model is a smooth runner. 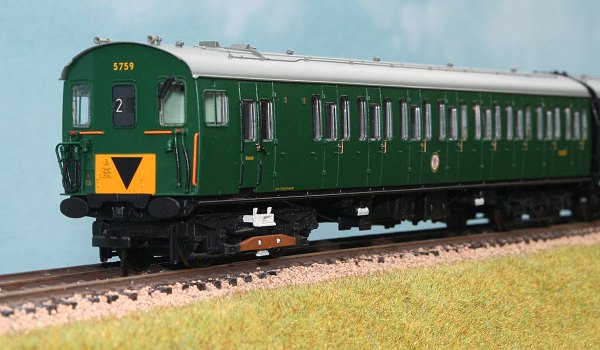 The latter model is of unit 5759, the 2EPB preserved by our friends, the EPB Preservation Group, at Shepherdswell. This model is of 5759 in its original, i.e. pre high intensity headlight incarnation, not as currently preserved. Whilst Bachmann EPB models are characterised by a very high quality paint application and graphics, unfortunately this model is somewhat let down by fuzzy edges to the small yellow warning panels which can still be seen from a normal viewing distance, plus the inverted triangle is slightly off-centre. Given it is specifically the small yellow warning panels that make this version a premium priced limited edition this is most unfortunate. Otherwise it is to the same high quality as the all blue version. This model displays headcode 2 (numeral on the left hand blind, right hand blind is a black blank) on the DMSO and has a double red blank on the DTSO. 5759 was at times a Wimbledon based unit and headcode 2 at the time of this unit’s introduction was for Wimbledon – West Croydon and Victoria – London Bridge via the South London Line. Pictorial evidence of 5759 working Wimbledon – West Croydon on its first day in service can be found on the SEmG website. 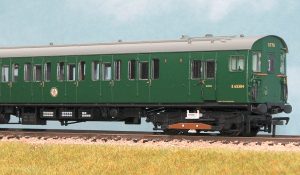 In any great quantity the “early” green version became available about a week later. This is of unit 5770 and as befits it earlier timeframe it has a whistle above the driver’s cab window rather than twin-tone horns, large numeral headcodes and double white blank rear headcode (so a red oil lamp on the rear is required). Note it does not have the additional conduit on the cab front of early EPB-type units, but pictorial evidence suggests this conduit, where fitted, was removed fairly soon after introduction. This model carries headcode 3 on its left blind, usefully for its period denoting Purley – Caterham shuttles and Elmers End – Sanderstead.

The final regular production version became available in late July, the BR blue & grey version, with Network SouthEast Kent Link branding and featuring high intensity headlights and red “com” warning stripes. This version has a double white blank headcode at one end and double red blank at the other.

Further limited edition versions have been 31-375Z the “early” blue version (with small yellow warning panel) were available  from Modelzone and in September 2011 Bachmann released a Network SouthEast special edition version, of unit 6225 displaying headcode 80 (Cannon Street – Dartford via Greenwich), available only to members of the Bachmann Collectors’ Club. This was produced to celebrate the Silver Anniversary of Network SouthEast. 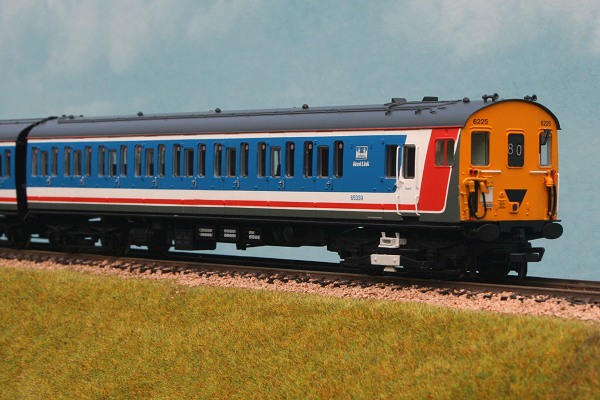 The following comments should be considered in the perspective of an extremely good mass produced ready to run model, but the common gripes from modellers so far are:

However, in the grand scheme of life these are relatively minor points.

All good things come to he who waits, so they say. This model appears to be as good as the wait has been long. Congratulations Bachmann ! 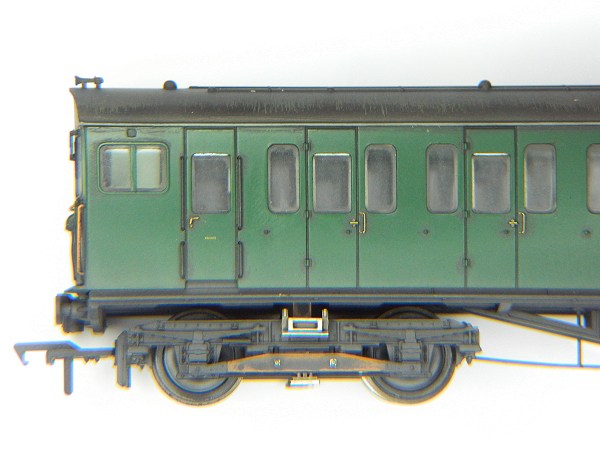 SEG member Rick Squirrell has contributed this picture of 5759 custom weathered by Lord & Butler. He comments it is creditable, but being rendered largely in grey lacks the pervading characteristic brown film resulting from the iron brake blocks that those knowing the Southern well would expect.