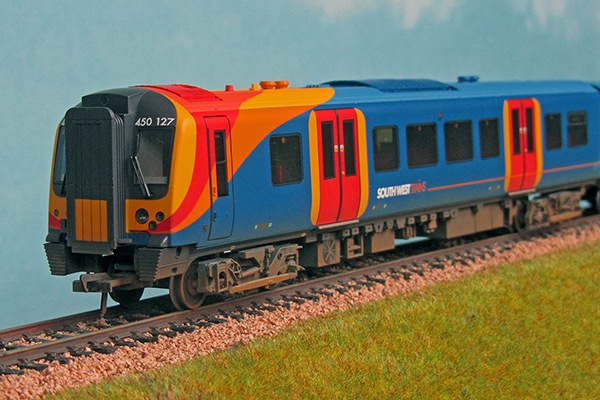 Arriving in early August 2017 roughly ten days before South West Trains sadly ceased to exist, deliveries of Bachmann’s Class 450 models arrived.  Just because modern rolling stock tends to be boxy, or curvy, or both, and festooned with far less exterior additions than rolling stock of old does not mean it is any easier to capture and model them authentically.  Bachmann’s Class 350 Desiro model is rated as being one of the best modern image models of recent years, and deservedly so.  With the DC only Class 450 being very similar, modification of the tooling to produce a South West Trains version was hoped for.  Following its announcement it was keenly anticipated, and following Bachmann’s customary long gestation period it has finally arrived.  Was the wait worth it?  Absolutely! 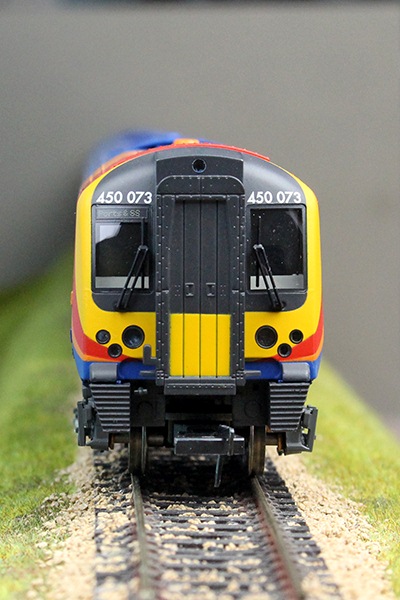 (above) Full frontal cab front of 31-040, the “clean” version, with working tension lock coupling. Note the “Ports & SS” destination on the second-man’s side and that the pickup on the driver’s side needs adjusting!

Bachmann have produced two versions, 31-040 unit 450073, which has a destination of Portsmouth & Southsea and 31-041 unit 450127 (the last of the fleet) in lightly weathered condition, which has a destination of Waterloo.  In the total absence of any drawings at all and only nominal dimensions published it is difficult to judge the accuracy of this model precisely, however its basic dimensions appear to be accurate within 2% and it compares very well indeed to photographs in terms of shape and details.  Application of the South West Trains colour scheme and letting is extremely good, though more on the lightly weathered version later, and they have got the alignment of the “swoosh” on both models correct (for more information please view our “swoosh” feature page). 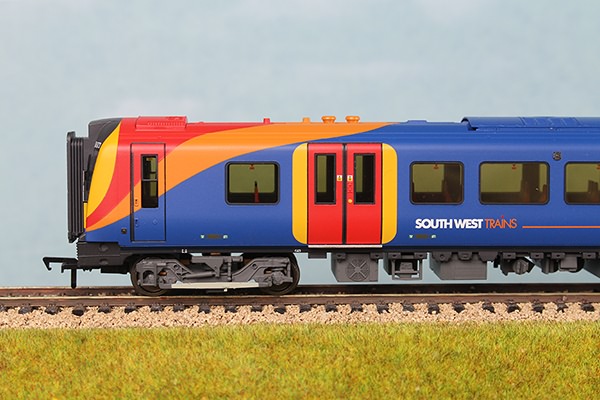 (above) Leading end of Bachmann 31-040 450073 showing correct alignment of the swoosh to the cab door’s window.

What exterior details there are, and the bogies, compare very well to photographs.  The representation of the sand pipes are wonderful but they are very delicate and my Class 350 model is already missing some of them.   This is extreme nit-picking, but the treads of steps are not picked out in a silver/bare metal colour.  The bogies appear to be made to true 4mm scale so the pick-ups fall outside of a conductor rail mounted on the ends of sleepers on OO/HO gauge track.  The wheel flanges are about average for decent models these days, not finescale but far from being the pizza cutters of old, and a random check of back-to back measurements found them to be spot-on.  I think the moulding of the underfloor and roof detail is a little on the light side, particularly in respect of grilles.  All of those fussy little labels on the underfloor cabinets are not represented and their absence does not look quite right, plus if you look closely about two of the smaller underfloor equipment items do not exactly match photographs.  The worst aspect of this model are the inter-car cable looms, which are left to be added by the modeller.  These consist of three parts, two for fixing under unit ends and a central piece to clip them together for use on static display models only.  These are also lightly moulded and the under unit end part of looms are moulded onto a larger rectangular backing plate so they do not look good at all.  However, the numerous what I initially called “small exterior gubbins” immediately under floor level are exquisitely done and match photographs exactly.  Having since looked at these items closely on both models and the prototype I suspect they are underfloor equipment mounting clips, which obviously do not work on the model!

(above) Detail on the bogie and underfloor of the MSO of 31-040 450073. Note the delicate sand pipe. The moulding of the underfloor equipment is a little on the light side and the absence of the plethora yellow labels is noticeable.

The motor is in the lavatory end of the vehicle with the empty pantograph well and it takes up about a third of the interior.  This motor drives one bogie in this trailer car.  There is provision for a 21 pin DCC decoder, and as the inter-car couplings are electrically conducting one chip serves the whole unit.  There is also an enclosure for a small downward facing loudspeaker for use with a sound decoder.  Drive is as smooth and responsive straight out of the box as one expects from Bachmann.  All four cars have warmish white interior lighting and directionally controlled head and tail lights.  On DC these are not constant voltage so do vary in level with the power applied and only the daylight mode headlight is illuminated.  There is a switch for the cab lights under the cab air-conditioning unit hatches, but I have yet to find a way to remove these without levering with a screwdriver and risk damaging the fine paintwork.

(above) The roof of the “clean” version’s MSO. Can you get the cab’s air-conditioning hatch off without damage?

The inter car couplings are the spear-with-electrical-contact types used on other Bachmann EMU models.  I do not find these easy to insert and remove into the sprung close-coupling units and they are prone to damage if not inserted or removed exactly right.  On each cab end there is a choice of a slimline tension lock coupler or a lower valance and dummy Dellner coupling, both options inserted into a NEM 362 pocket.

(above) the TSOL and (below) TCOL of 31-041 450127, the lightly weathered version. Note the interiors. In none of the pictures in this review have the inter-car couplers nor inter-car wiring looms been fitted.

It is difficult to see into the interior of a real Class 450 unless you are close up and it is correctly the same on the model, however I suggest you do look closely to notice that the seats in standard class are represented correctly red and those in first class are correctly blue.  Each of the four cars has a letter printed underneath so the correct formation of cars can be done A to D, however as the inter-car couplings are not handed the instructions clarify that the trailer cars need orienting with their lavatories on the same side and to the left.  Perhaps arrows printed underneath would have made this even clearer?

(above) The roof of the lightly “weathered” version TSOL car. Note the quite faded roof but glossy air-conditioning hatch, and in particular the well detailed empty pantograph well. The reviewer has seen plenty of Desiros with cleaner and glossier hatches than the roofs they are mounted on, but should the roof realistically be so evenly faded?

Finally to the weathered version.  I do not like factory weathered models as I find they are simplistic and a one size fits all solution, and I find this particular model perplexing.  On the plus side the light dusting with “track colour” on the bogies and underfloor equipment helps pick out the detail and I think this looks better than plain light grey on the clean version.  However, the roofs are represented as being evenly faded but not dirty, and with glossy air-clean con hatches.  I have looked at hundreds of photographs (taken from 2003 when first introduced until a few weeks ago) of real units and I have yet to see a real unit looking exactly like this model, in fact the overwhelming majority of pictures show roofs slightly darker.  Though there is a picture taken on 9th March 2009 at Hook of this very unit in Modern Locomotives Illustrated 178; the blue parts of the roof and blue air-con hatches are slightly faded on all four cars but this picture shows the “swooshes” at each end glossy, so it does not exactly match the model.

In conclusion, Bachmann’s South West Trains Class 450 Desiro models are extremely good and a very welcome addition to the under-served selection of models of current-day units.  To find any criticism one has to look very closely indeed, which is a tribute to Bachmann’s design and manufacturing skills.  Not that at the time of writing one exists, but I look forward to a model of a Class 450 in South Western Railway colours, hopefully before SWR cease to exist.