Hornby‘s fourth Southern EMU in recent years was announced as part of their 2013 programme of new models just before Christmas 2012. That it was scheduled for the first quarter of 2013 took many by surprise (and delight), however this group’s Modelling Secretary was aware that it was in the offing as he had been asked for, and supplied, “seed corn” details about 2Bils to Hornby several years ago.

The first production batch, representing the post 1936 version of 2Bil, was planned as:

(product numbers without a suffix are DCC Ready, “X” suffixed numbers are fitted with a DCC decoder)

This model falls under Hornby’s new “Clever-Design” principle whereby design and production costs are strictly contained by limiting the number of features and separately applied details (designing down to a price). Will this principle be regarded as a retrograde step to modellers now accustomed to highly-detailed fully featured models? Read on and make your own judgment.

To get it out of the way early, the biggest issue surrounding this new model was its availability. For reasons best known to Hornby they seriously underestimated the demand for this model and as a result the numbers produced in the first run fell far short of orders received from retailers. Informed sources indicated that demand for the SR and non-NRM BR versions was double the supply. As a result retailers both had to ration models to those who ordered in multiple and also disappoint some customers who only ordered one. Additionally supplies to retailers are proved to be sporadic – meaning the reviewer, despite advance-ordering his requirements the day the model was announced, had to wait some time to obtain samples to inspect. To help satisfy the short-fall Hornby produced a second run of the SR version R3161A and BR version R3162A.

However, things from now on are predominantly positive. Despite the constraints of the “Clever-Design” principle this is a well designed and produced model which matches dimensions, drawings and photographs extremely well in all but two respects. Designing to a price has resulted in power bogie sideframes being used on the pick-up bogie on the DTS rather than design a trailer bogie with a shoebeam. From a distance this is hardly noticeable, in fact I did not see this initially. Secondly a design error – on the underframe of the DTC there is an arc chute (a box which prevents an arc from the line fuse damaging the surrounding area) to the rear of the car that should not be there, there should only be one arc chute on this car towards its cab end. However, this error is easily and quickly rectified – simply cut it off with a sharp knife.

The moulding throughout is to an extremely high standard and in the opinion of the reviewer things like the grab handles being moulded on, rather than separately applied, and that most of the detail on the roofs is moulded on, matters not. It is very well done and does not notice from a normal viewing distance. Items such as jumper cables and tank fillers are separately applied and the cab roof gutter drains are works of art,as indeed is the whole cab front. The flush glazing is effective, especially so on the corridor sides, though this model does display the white glue problem afflicting models manufactured in China regardless of brand. The painting and graphics are to Hornby’s usual very high standards, the shade of green is right to my eyes. Please be very careful when removing and replacing this model from and to its box, as the details, particularly the underframe and lower ends of the cab roof drains, are delicate and easily damaged. Quite a few of my 2Bil cars are already missing some of their lower ends of drains simply due to removing the cars from the packaging and clingy polythene protective wrapping.

The model driven by a Hornby pancake motor, mounted in a metal box within the brake compartment (as with Hornby’s Brighton Belle model) which runs fairly smoothly straight out of the box and should improve with running-in. However this drive will never be as smooth nor responsive as a flywheel-drive can motor with gear tower arrangement as used by Bachmann on their EMU models. For those not buying the DCC version, the model is DCC-ready and instructions for adding a decoder are supplied. The motor car, appropriately the DMBSO, weighs 369 grams biased towards the motor bogie end, which should help with traction. The trailer car weighs 126 grams. The two are coupled together by a non conducting drawbar as part of a close-coupling mechanism which keeps the cars close together on the straight but separates them more to go around train set diameter curves. Coupling together is, as with other models using similar mechanisms, quite tricky and best done off the track but close by, cars on their roofs on a protective surface, and then both cars carefully rotated together and placed on to the track. As on the real things there is a centrally mounted buffer between the two cars, fixed to the DTC. Despite the “Clever-Design” principle the cab ends have sprung buffers. The outer ends have NEM coupler pockets but couplings are not supplied. Although not looking right on this generation of unit I am planning to fit Kadees to permit easy coupling and uncoupling when splitting and joining units, though pro-tem I have fitted R8219 narrow Tension Lock couplers on a NEM shaft. 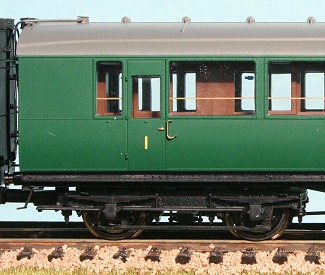 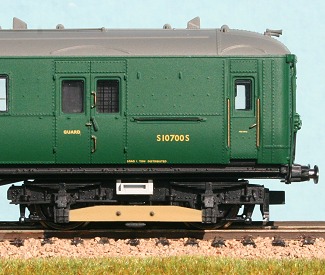 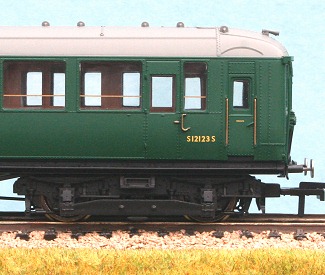 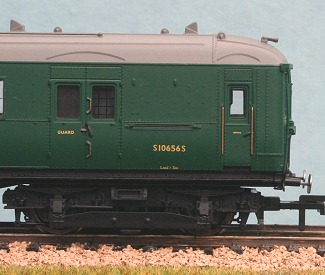 As can be seen above the moulding of the bogies is finely done indeed, however note (bottom left) the use of power bogie sideframes on the pickup bogie of the DTC (compare with the power bogies on the DMBSOs top and bottom right). Note also the thicker buffer shanks on unit 2134 (top right) and the original thinner shanks on unit 2090 (bottom right). The bogies appear to be made to true 4mm scale width so the shoebeams and pickups overhang conductor rail placed on the ends of sleepers on OO/HO gauge track. As with Hornby’s Brighton Belle the flanges on the wheels escape criticism of being mini “pizza cutters”.

Below note the finely detailed underframe and representation of the screw heads on the body sides. Rewardingly Hornby’s oversight on the Vep underframe has been rectified on this model and the brake rodding extends to the bogies. Note on the underframe of the DTC below the left hand arc chute (the white thing hanging down from the floor between the non pick-up bogie and the trussing) should not be there. Maybe Hornby’s drawing office cut and pasted one too many!

There is no lighting of any description on this model. Personally I would have preferred to pay a bit more to have internal and headcode lighting because it does make a significant difference to looks. A small sheet of self adhesive headcode stencils is supplied for the modeller to affix. These are quite fiddly for my middle aged increasingly arthritic fingers to apply and I would have preferred transfers, which would allow more adjustment before final fixing. However, stencil headcode transfers are available from Modelmaster, product code 4310. I have applied headcode 12, which is for Waterloo-Alton, the front portion of Waterloo to Alton (front portion) and Portsmouth and Southsea (rear portion) semi-fast services which split and joined at Woking. This is the working I most associate with 2Bils, having for many years observed them from my Grandfather’s garden overlooking the mainline south west of Surbiton. I know 2134 was a Reading batch unit, but I am assuming that by the early 1960s the batches were common user on the South West division services. I am wondering if Hornby underestimated demand because they did not appreciate modellers will want to reproduce the multi unit splitting services that were the 2Bils’ bread and butter. Other suitable headcodes for the early 1960s are, for instance: 37 – Horsted Keynes and Seaford, 28 – Waterloo and Reading or Aldershot via Barnes and 62 – Brighton and Portmsouth Harbour direct.

Hornby are accommodating differences between units. R3162 unit 2134 correctly has the heavier buffer shanks of the last batch built for the Reading lines whereas R3177 unit 2090 and R3161 unit 2114 correctly have the slender shanks. R3161, the SR version, has a whistle on each cab front whereas both first batch BR versions have twin airhorns without yellow warning panels. I know there is photographic evidence of 2134 having twin airhorns before it received yellow warning panels but I would have preferred a green version without warning panels to have whistles as this is more representative. 2090 also has twin airhorns without yellow warning panels, is without “1” first class markings on the relevant DTC doors, and has black arc chutes and black shoebeams, exactly as it is currently displayed at Shildon.

In summary, this is a very good model of a popular prototype that, once Hornby produce enough, I hope will sell in large quantities (I know quite a few modellers that want to run at least one 8Bil!) and help promote Southern Electric modelling. Any criticism made is, in the grand scheme of things and when compared to other models, minor. Well done Hornby! What hope now for a 2Hal and preferably a 4Cor to go with this fine model? And please produce an improved 4Vep….

The first version from the second batch became available in September 2013, R3161A SR unit 2041 in Maunsell lined olive green, as did further supplies of the NRM version R3177. A BR green version R3162A, unit number unknown at the time of writing, is currently due in early 2014. 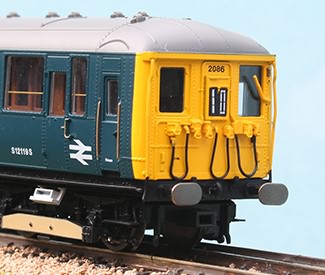 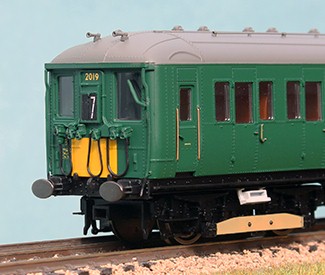 These are to the same high standard as the 2013 releases. However, whilst Hornby correctly fitted newly tooled unpowered bogie sideframes to the pickup bogie under the cab of the driving trailer composite on their 2Hal models they have not done so with these batch of Bils – a missed opportunity to correct an earlier compromise to minimise tooling costs.

I am hoping that eventually Hornby will produce an early BR green version with whistles.