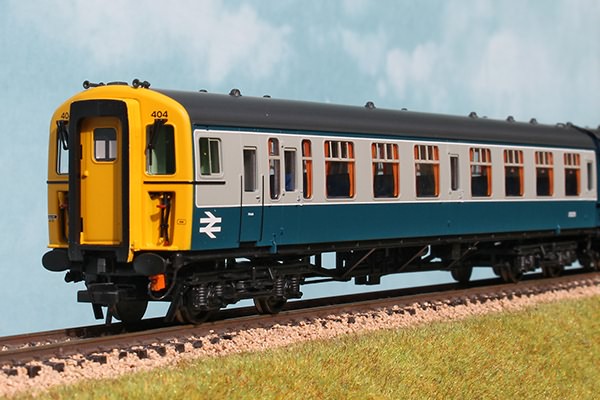 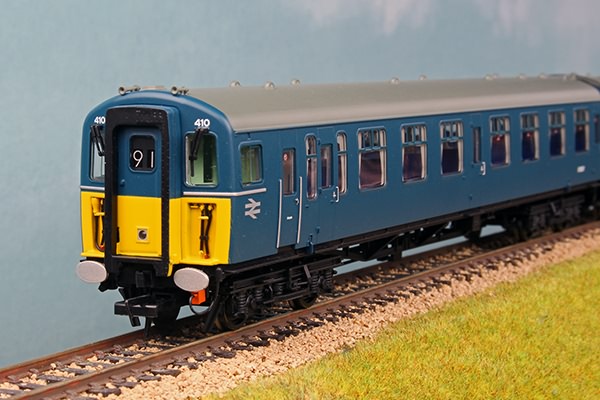 (above) One driving car of the Premier Charter Unit’s 410, 32-644Z, prior to the supplied etched BR arrows being fittedAt the time of revising this review (early October 2017) only the Network SouthEast version has yet to be delivered.These are extremely good and well detailed models.  I do not have a trustworthy set of drawings for a TC and only outline dimensions, however I have yet to find any major dimensional errors and these models overall and in fine detail compare very well to photographs.  Of note the liveries and lettering seem accurate enough and colours believable, though the inter-car corridor connection shrouds (“bellows”) should be blue on at least the blue & grey versions and not black as modelled.  In reality they were coated in dirt. Also, if comparing to photographs extremely closely perhaps the full yellow ends wrap fractionally too much over the cab roofs. My first reaction was that the large BR arrows on the sides of the blue & grey versions were too large, but when comparing to photographs I suspect if there is an error at all then they are only minutely oversize.  I have, however, found a glaring error – the windscreen washer filler caps (which I have always thought looked as if they came of an Austin Mini) are body colour and not picked out in silver vice the chrome plated which they were!  An observation at this level neatly typifies this model – one has to look very closely indeed to find fault.  The quality of moulding is extremely good.  The bogies and underframe detail are approaching to Rapido’s obsessive approach, the lifting rigs (which Hornby bottled out of for their 4Vep model) are fine, as are the footsteps. Grab rails and handles, including those wrapping the cab front, are moulded on, but are so well done and picked out with paint that this is not noticeable.  The windows are about as flush as it is possible to get and I have yet to find any appearance of the white glue problem experienced on other models, both by Bachmann and by Hornby.One of the major flaws with Hornby’s Vep model was that the dimensions and relative proportions of the cab front are incorrect and it instantly looked wrong.  Upon seeing the cab fronts on these models I did not have the same reaction.  So is the cab front correct?  I subjected this model to the same test, sizing a head-on photograph of the model’s cab front to the same size as a head on image of a real GRP cab front, comparing visually and measuring. 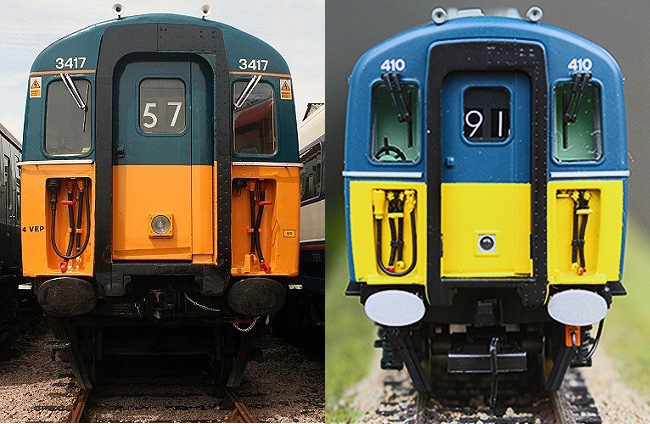 Please note that this is not quite as good a comparison as in our Hornby 4Vep review as the photograph of the 4TC model was taken from a slightly higher elevation, however the model photograph has been sized so that body width and height at the same locations match, so comparative measurements can be made

Much to my surprise, the cab front is not totally accurate.  The corridor connection is about 1mm too narrow and the pillars between the cab windows and body sides are fractionally too wide (this, as it happened with Hornby’s Vep too, I suspect may be due to issues to do with injection moulding), plus the width of the driver’s window is slightly too wide.  However, the sizes of the jumper cable recesses, thickness of the corridor connection rubbing plate, width of the door in the connection, sizes of the headcode window, off-side cab window and high intensity headlight are spot-on.  Whilst dealing with criticisms of the cab front, the windscreen wiper mouldings are rather chunky, no doubt as a concession to mass production and strength, and the font used for the headcode numerals is a tad thin, except on the Premier Charter Unit headcode where pictures support use of a slimmer font. However, none of these factors worry me at all – it looks far more accurate than Hornby’s Vep.

(above) The TBSK the Premier Charter Unit’s 410, 32-644Z. Terrific fine detail – note the security cage at the brake end

(below) The other side of a TBSK, this time on a blue & grey liveried version. Correctly coloured curtains and fine underframe detail
and (bottom) 32-643Z the Network SouthEast late livery version 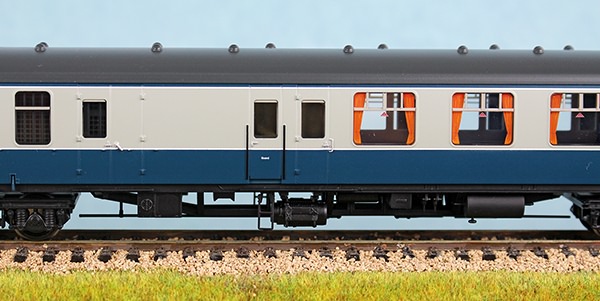 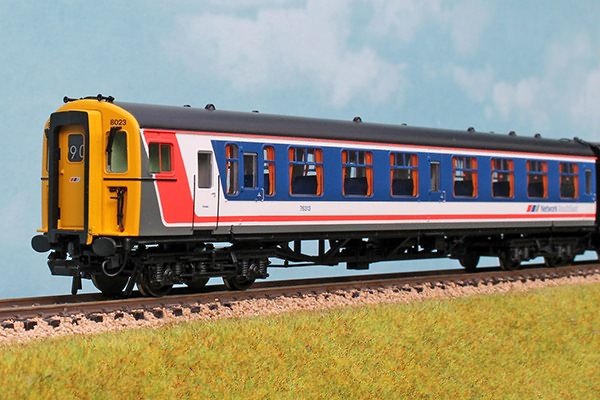 The TBSK has provision for a 21 pin DCC decoder, which serves all four cars, and a 15mm diameter loudspeaker for a sound decoder.  I am struggling to conceive of exactly what sort of sounds one uses for a trailer unit save for, perhaps, the rumble of steel wheel on steel rails, just the sort of low frequency sound a 15mm loudspeaker is absolutely hopeless at reproducing.  A unit without a chip runs well on a DCC layout, though a modeller with DCC has found the lack of a chip causes a short circuit in reverse loops due to the conducting length of a unit being much longer than a locomotive thus bridging two sections which shuld be isolated. So if you have DCC layout with a reverse loop you will need to install a chip in each unit. Each car has warm white interior lighting, directionally controlled headcode boxes (which in the forward direction are a bit too cool white for my liking) and high intensity headlights where appropriate.  None of the lighting on DC is constant voltage so it does vary with the amount of power applied.  When running with a locomotive the loco does not significantly electrically load power draw so there is no difference to the variation.  Under the TBSK are three switches allowing the headcode lamps at each end and the interior lights to be switched off on DC.  Inter-car couplings use the handed latching conducting (four circuits) claw coupling first used on Bachmann LU “S” stock and Continental unit models.  Although visually intrusive the advantages outweigh this disadvantage as they are far easier to couple and uncouple – especially whilst on the track – and are less prone to damage.    Every bogie has electrical pick-up on all wheels, the wheel flanges are about average for decent models these days, not finescale but far from being the pizza cutters of old, and a random check of back-to back measurements found them to be spot-on.  A four and eight car train runs reasonably freely, though all those pick-up do provide some additional friction.

(below) The close coupling arrangement – note the incorrectly coloured inter-car connection shroud – and the substantial but easy to couple and uncouple, and reliable, electrically conducting coupling. Note also the fine foot steps on the car ends

(above) fine inner end detail on the end a DTSO of unit 410, 32-644Z, prior to the supplied jumper cables being fitted.

(below) The Network SouthEast branded version does not have a NSE flash on its cab doors. (I do not have a picture of 8022 in this period but pictures of other TCs show units both with and without NSE flashes on their fronts.)

The handedness of couplings permit a three car unit by not including the TFK, however renumbering of the cars and unit will be required.  Unlike Bachmann’s Desiros there is no under car lettering so you need to ensure TBSK and TFK are coupled to the right DTSO and the right way round, i.e. their corridors on opposite sides.  Here is a list of formations of the units modelled:

Unfortunately Bachmann/Kernow have modelled 8007 oriented as ADB977684 – ADB977686 – ADB977685 – ADB977687, i.e. the driving cars on the wrong ends (and as it has handed couplings it does not fit any other way). The obvious solution would appear to be to take off both driving car bodies and swap them around, however given lighting circuist are involved it is not known how easy this is to do.

(above) Fine roof detail, which compares well to photographs, on a DTSO

Returning to details, headcodes are changeable by way of interchangeable corridor connection doors – as on Bachmann’s 4Cep models.  Headcodes supplied are double white blanks (x2 – which illuminate red when on the rear) 91, 62, 90 and 69.  In TC use 91 being the legendary Waterloo – Weymouth (fast), 62 Waterloo-Salisbury (semi-fast), 90 Waterloo – Weymouth Quay (fast) and we are not yet sure what 69 is for in this context.  I would also have liked 80 Portsmouth Harbour – Reading, but no doubt I will eventually make my own for this using one double white blank.  Also separately supplied for fitting by the modeller are inter-car below-floor jumper cables, as are plastic tools to aid coupling and uncoupling.  I prefer to use a metal letter opener, and any such flat thin blade is just as effective.  Both overall blue versions come with their small BR arrows printed on but etched arrows are supplied for the modeller to fit over them.  Units are fitted, where appropriate, with effective representations of the correctly coloured curtains for their period, orange in early livery versions, grey on the later Premium Charter unit. Some modellers have queried whether the layout of tables in the DTSOs is correct as the models have tables in every bay except for the bays with a door. My recollection is that the tables were removable and there was no long-lasting definitive layout. Take the bodies off and the tables can be removed, but it has been found that they are then diffcult to re-instate later. I have a photograph of a DTSO interior (taken after withdrawal) which has tables at every bay except those with doors.

(below) TFK on the Premium Charter unit model, showing the correct grey curtains

(below) DTSO of 32-642Z unit 8022 BR blue & grey with Network South East branding. Note tables in each seating bay except for the bay immediately behind the cab
(bottom) back to the beginnings of TC operation 32-640Z the original overall BR Blue version

(below) The BR Research Department version – said to be a particular hit with BR Derby fans.

In conclusion these are fabulous models and you really have to look very hard, and know the real trains well, to find fault. I hope sales will be so strong that Kernow Model Rail Centre will be encouraged to commission 4Rep units to go with them.