Announced in January 2017 Bachmann’s 4Bep models went on sale towards the end of July 2021. In the same way that a real 4Bep is a 4Cep unit with its trailer second car replaced by a trailer buffet car, this model is Bachmann’s existing 4Cep model with a newly developed and tooled trailer-buffet in place of the TSK. Therefore this review will largely pictorially concentrate on the new vehicle and you are referred to our original 4Cep review for information and an opinion on the model this new version is derived from.

The newly researched, developed and tooled trailer buffet car is produced and decorated to the same extremely high standards that make the Cep and Bep models in appearance state of the art.  There are no visible differences that betray one vehicle to be a much newer project.  I have compared the model to pictures and whilst this cannot determine things are accurate to within fractions of a millimetre I cannot find any details inaccurate.  This is a relief as in my capacity of Modelling Officer I supplied Bachmann with clear photographs, taken by a SEG member, of underfloor and roof details!  The only criticism I have read is that the buffet counter area is a basic portrayal and being rather visible through the windows could do with additional detailing.  I tend to agree with this, but the body can readily be taken off so the modeller can add required detail.  Up until this point this is without hesitation another marvellous Bachmann model, very many thanks.

Underfloor detail on the service side

However, it is not without issues.  Like the recent 2Hap models and as mentioned in our 2Hap review, coupling the cars together is tricky and the couplings can easily be damaged.  As with other 2 and 4 car Bachmann Southern EMUs and DEMUs the cars are connected by an electrically conducting bar between coupler pockets. 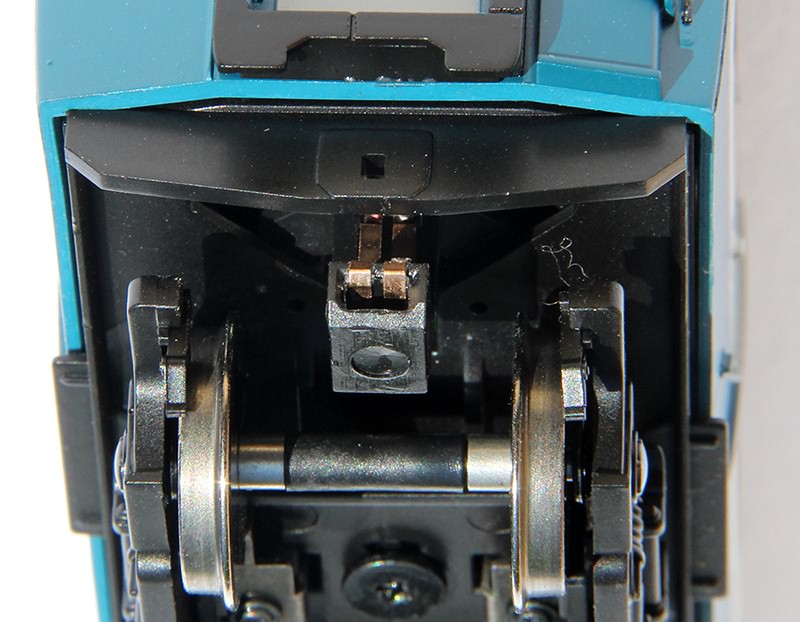 It has been found that the coupling bars will not fully insert into the coupler pockets, at least without a lot of force which can cause irretrievable damage to the electrical contacts on the bar and coupler pockets. This is because the “angle of attack” of these sprung contacts (as seen above) is near to vertical. Therefore as they will not compress when pushed into the box they are a considerable resistance to being inserted. This is not helped by the coupler box being attached to the lightly sprung close coupling mechanism which can float laterally and vertically and forwards/backwards. It is necessary to hold the coupler pocket firmly whilst inserting the coupling bar. Having discussed this with other Southern Electric modellers, whilst this form of coupling on the earlier Ceps, 2EPBs and 2Hs also had problems these were not a severe as encountered on the 2Haps and now the 4Beps. Fortunately Colin Scott-Morton was able to get to his 2009 4Cep model quicker that I could find mine. On comparing the coupling bars he saw that the electrical contacts on earlier versions do not stand as far proud above the bar as recent versions. Which explains why they are easier to insert. Solution – use earlier coupling bars if you have some spare or can get them. I have also discovered that if the sprung contacts are first compressed with tweezers – the locking variety is best – when first inserted, and then the tweezers removed once the bar is comfortably part-way into the coupling box, there is a successful full coupling. However, this is the sort of operation which ideally requires four hands and one should not have to do this to couple model railway vehicles together, especially on a model with a RRP of £499. Frankly, Bachmann ought to supply replacement coupling bars manufactured to the earlier design. 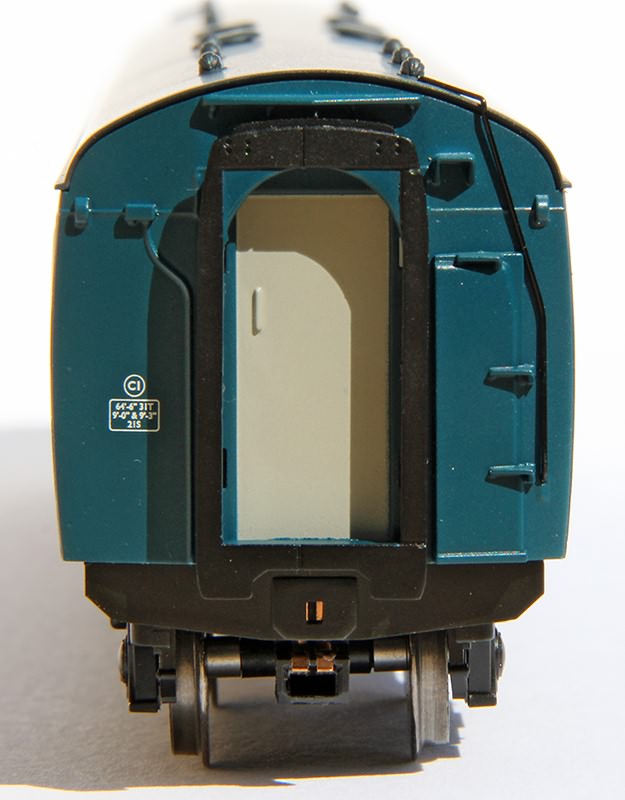 Then even before this model appeared there were three controversial issues discussed by railway modellers.

Firstly, disappointment that it is based on the Cep model without any updating. However, it is widely held that this model from 2009 was outstanding for its time, and aside from its motor mechanism visibly intruding into the first part of the passenger saloon behind the guard’s accommodation, twelve years later it still easily holds its own. Though whether Bachmann’s recent alternative of a below-the-window-drive is an improved mechanism is also a point of contention. Additionally Bachmann modified its 2EPB/2H mechanism for the 2Haps by adding miniature switches underneath to be able manually to switch lighting on and off when using DC. This led to an expectation that the same would happen for the Beps, which has not. I am not among the disappointed as I was not anticipating any changes.

Secondly, when launched in 2017 and until the 2021 catalogue, the green version was advertised as a “late” green incarnation, i.e. with small yellow warning panels, air horns, shorter thinner font used on the headcode blinds, and coloured cantrail lines signifying first class and catering. Then, without any corrective announcement, in January 2021 it became an “early” green model, but perversely was initially still illustrated with a Colour-Rail picture of a unit in “late” condition, which fostered confusion as to exactly what would be on offer. Many modellers I know who placed advance orders as early as 2017 because they specifically wanted a “late” version then cancelled their orders. Such is the peril of announcing so far in advance, taking orders and then making a late significant change to the specification.

Finally to address the elephant in the room – the price. I will not take up space in this review detailing the reasons for labour, material and distribution costs progressively increasing ahead of general inflation since Bachmann first produced its 4Cep. Needless to write the global pandemic has further increased labour and material costs. Plus that the global freight shipping crisis is massively inflating transport costs is well known. Manufacturers deserve a healthy return after covering their R&D, production, distribution and marketing costs to survive – after all, we want more excellent models to be developed and produced in the future! Other model railway manufacturers have price rises of circa 10% in the pipeline, but the price of this model is substantially ahead of equivalent models and massively ahead of general inflation. This is a shock given the output from 4Cep tooling commenced 12 years ago. In addition to the late change of the specification of the green version, the price (even at a discount) has further led to some, including myself, cancelling all or part of their orders. I routinely used to buy two of each version EMU (one for renumbering), but I cannot at this price, nor can I now buy versions in which I have less interest just to support the industry to produce Southern MUs.

There are objective figures and then there is the more subjective territory of value for money. Though price comparisons with similar products can add some objectivity to value. The RRP of these models is (rounded figures) £499, the common discount price (also rounded) is £425. This is a 70% increase over the estimated price when the Beps were announced in 2017, during which the Consumer Price Index has only increased 7.6% (using calculators on www.measuringworth.com). The 2017 estimated price was itself a 145% increase over the 2009 4Cep price (CPI 27.5% over this period). The reality is that the cost of a single 4Bep in 2021 would, after allowing for the decrease in spending power over 12 years, have bought three 4Ceps in 2009.

As for comparing with prices of similar models – next year Bachmann itself will be selling its completely newly developed and tooled Graham Farish N gauge Class 319 models and currently they are projected to sell 40% cheaper. Whilst fewer materials are involved in a smaller scale, miniaturisation can increase costs. It is known that R&D/manufacturing costs and a model’s scale are not directly proportional. For another N gauge comparison, Revolution Trains’ N gauge 11 car Pendolino will only cost 2% more. Hornby’s 4mm scale high quality 5 car IET pack now retails at 13% less and their forthcoming newly developed and tooled 5 car APT pack (to a similar specification as the IET) is currently priced at 7% less. Finally Rapido are to do another run of their APT-E, this time not as a limited edition. This 4 car somewhat specialist train has features and a drive mechanism, including a working tilt mechanism, superior to the 4Bep. A DC silent version will be available for 24% less. You will even be able to buy a DCC sound APT-E for 4% cheaper.

Ultimately value for money is a personal decision, not entirely based on personal wealth. With a high price such as these 4Beps my fear is for the future of Southern Electric modelling. As I have written before, whilst you can realistically create a Southern Electric layout using a single 2 car unit, such operations are, and have always been, in the margins. A good portrayal of the Southern Electric system invokes the “M” word in EMU. Such high prices deter from multiple purchases. Will sales be hit? Will the development and production of model multiple units in the future – particularly Southern types where intensive multiple working is more common – be perceived as unviable? Only time will tell, but I know I am not the only person who is concerned. Maybe the market for kits will have to resurge?

So in conclusion, this is another very welcome, high quality Southern EMU model, but at a challenging price substantially ahead of similar models of an equivalent quality.